On Brisbane’s doorstep are a diversity of spectacular and unique reefs, which is a truly unusual scenario given proximity to large metropolitan area. In a short boat trip from the coastline of bustling Brisbane’s hub of 2 million people, you can find subtropical reefs that host a diversity of tropical and cold water marine species.

While these reefs may not be as extensive, diverse or well-known as the Great Barrier Reef, they are pretty special. The offshore site Flinders Reef, for instance, is home to 125 species of coral. Research shows that Moreton Bay’s inshore reefs have about half of the coral diversity of offshore reefs, as the corals that live here are more robust to tolerate water quality influences from the land.

Moreton Bay’s marine environments host the largest known aggregation of leopard sharks in the world, as well as seasonal aggregations of both manta rays and grey nurse sharks. There are even two coral species that feature Moreton Bay in their name!

The region’s waterways are under growing pressure from a rapidly increasing human presence, with the SEQ population expected to reach 4 million by 2026. Stressors such as habitat loss, nutrient runoff, boating, anchoring, overfishing, marine debris and climate change will have increasing consequences for reefs in the SEQ region. As such, long-term monitoring of these habitats is critical.

Regional monitoring launched in 2007, with a notable expansion of sites in 2009. With a decade of data, we’re making our mark and working to closely connect citizen science with the decision making process.

2017 marked a decade of reef monitoring in the Moreton Bay region. This represents of the of longest consistent reef monitoring programs across the region, made possible by citizen science.

Throughout 2015 & 2016, we undertook a reef habitat mapping project in partnership with The University of Queensland’s Remote Sensing Research Centre and Healthy Waterways and Catchments. Trained volunteers conducted hundreds of spot checks across the Bay to document habitat types and make-up. UQ researchers used the field data to refine reef extent maps for the first time in a decade. The data has been used for the annual Healthy Land & Water Report Card and is available for other natural resource management applications including Marine Park management and zoning, and the SEQ Natural Resource Management Plan.

In 2016, we worked with the awesome team at University of Queensland's UniDive to successfully nominate Moreton Bay as a Hope Spot. Hope Spots are marine areas critical to the health of the ocean and deserving special protection. This is one of only 76 locations worldwide that have been reviewed and accepted by Mission Blue and the International Union for Conservation of Nature (IUCN). While acknowledged for its unique marine wildlife and habitats, the nomination also considered the extraordinary community effort being contributed through citizen science.

Over the past 10 years we have worked with partners to establish more than 20 regular monitoring sites inshore and offshore throughout Moreton Bay. Sites are visited annually by survey teams. A number of these are important tourism locations.

We also visit several reef sites scattered across inshore Moreton Bay that are seldom visited for snorkelling and diving, but are popular boating, fishing and recreational locations. These are also the closest in proximity to the bustling metropolis of Brisbane and the impacts from surrounding catchments.

We work closely with regional partners to monitor and report on findings. Since 2014, we have been collaborating with Quandamooka Yoolooburrabee Aboriginal Corporation and Quandamooka Land and Sea Management Agency to monitor important sea country sites.

Our data currently contributes to the annual Healthy Land and Water Report Card, is reported annually to our stakeholders through a summary report, and is shared with the community through our Reef Ambassador outreach program.

Read more in our regional reports. 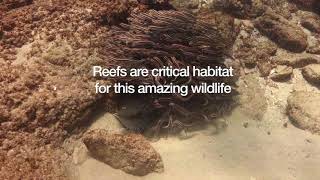 We think the unique city reefs of Moreton Bay/Quandamooka are truly something to celebrate and protect. But these reefs are still a bit of a hidden secret that deserve to be celebrated, recognised and protected for all to enjoy.

In late 2015, we put out a call for outstanding individuals to educate their community about all things reef and ocean in Moreton Bay. This was the launch of our first pilot Reef Ambassador program. We've been amazed.

We learned a few things along the way, adapted the program to further enhance how we support our Ambassadors to do great work in the community and the program continues to evolve.

Now, we've trained more than 40 Ambassadors and they're out in the community, inspiring more champions for our reefs. 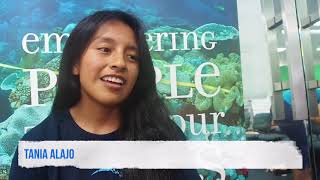 Minister applaudes volunteers and industry for clean up March (2013)

March 03, 2020
An early morning start for an awesome team from Reef Check Australia who headed over to Stradbroke Island on Sunday 1 March for Clean Up Australia Day.     Our land based clean up team assisted SIMO by sorting and recording the rubbish. The dive team conducted 2 underwater surveys and an underwater clean-up at Amity Point (in absolutely amazing conditions). Despite the pressure from recreational fishing, this site still supports some incredible coral growth, lots of fish life, octopus, wobbegong sharks and nudibranchs. The total amount of rubbish collected on the island was over 500kgs. Well done to the over 130 volunteers who assisted in this Clean Up day!
Read more

February 05, 2020
On January 18, Reef Check Volunteers Rose and Gemma joined 25 of Brisbane's most entrepreneurial young minds at The Cube for the Queensland University of Technology's Reef Challenge, as part of the QUT Summer Holiday Program. Facilitated by Bop Industries and QUT's The Cube, the workshop saw students from across Brisbane develop innovative solutions for some of the Reef's biggest challenges. The students were tasked with researching, designing and pitching marketable consumer products that would significantly improve ocean health.   Rose and Gemma worked with the teams, providing guidance on the finer points of marine science while being wowed by the student's creativity and passion. The team awarded 'Most Entrepreneurial' was Banana Bags who pitched a range of food based, biodegradable carry bags using green banana skins straight from Queensland farms. This team went all in on the circular economy concept, turning a waste product into a desirable item and ensuring it can then be re-purposed as fish food. With a mission to reduce plastic waste and a 'give-back promise' of 10% going to ocean protection, Banana Bags was a sure winner. Other incredible entries included oil cleaning drones; educational, recyclable plastic rash-vests; and coral harvesting take home kits. The RCA team were seriously impressed at the quality of the ideas on the day! Thanks to the Port of Brisbane and Queensland Government for supporting our work in this region.
Read more

January 02, 2020
Thanks to the Brisbane survey team for their fantastic efforts collecting quality data from two survey sites at Shag Rock on 21 December.   The survey team left in the early hours of the morning to North Stradbroke Island. The conditions were perfect and the sea life was booming! Two successful surveys completed with giant rays, leopard sharks, moray eels and plenty of fish which is all a sign of a healthy reef.   After the team made their way home they were informed that a Great White Shark was hanging around the corner at Point Lookout!       Thanks to the Queensland Government for supporting our work in this region.
Read more

December 27, 2019
On a bright Saturday morning, volunteers Tanya, Marzia, Krystel and Jodi hopped on a ferry over to Minjerribah (North Stradbroke Island) for the UQ Moreton Bay Research Station open day. This annual event is getting very popular, with the station offering activities for kids and environmental nerds of all ages, from touch-tanks, to boat tours of the bay, to talks about how parasites affect turtle ecology. Reef Checkers were happily stationed between the arts and crafts table and the NGO Humpback and High Rises.     The “guess who I am” cards were a big hit with kids - some of them staying for over 30 cards and bringing friends along to check out what they had learned. Although there weren’t too many divers present, adults were very interested to learn about Reef Check Australia’s survey methods and how we get that information to the government and other stakeholders. Lucky for us, a fifth Reef Checker and current UQ Honours student, Tanya Alejo, transformed from station volunteer to Reef Check volunteer in the afternoon, giving the rest of the team a chance to check out some cool talks.     Thanks to the Port of Brisbane and the Queensland Government for supporting our work in this region.
Read more
View all